Alpha and Beta testing[1] are two types of acceptance testing. Both of them are performed at the latest stages of the testing cycle just before product release. Today we are going to find out what are the differences between these two testing types and what they do have in common.

Alpha testing is usually carried out in a lab environment by the company employees. They try to simulate real users’ behavior and perform more or less typical user actions. Tests mainly focus on the question “Does the product work?”. If it does operate correctly, it is a good sign to move on to Beta Testing.

Beta testing is performed by intended users in the real-time environment. Its aim is to define whether customers would like the product and if not, then to understand the reasons. The received feedback is the most important outcome of the stage.

Imagine a chef who has just cooked a dish according to a completely new recipe. The chief and other staff of the restaurant are the first people to try the dish and to understand whether it is worth serving to the visitors. At this stage, the chief can make tiny changes to the recipe in order to enhance the taste. Other cooks can suggest some changes as well relying on their own experience. That is exactly how Alpha testing looks like.

When the chief is sure that the dish is good, he serves it to close friends to know their opinions. He wants to get an objective evaluation of his new dish. This is Beta testing. And if the first clients are satisfied, it is time to serve the dish to a wide audience.

Here we have gathered the main features of each testing type so you can compare Alpha and Beta testing by yourself. 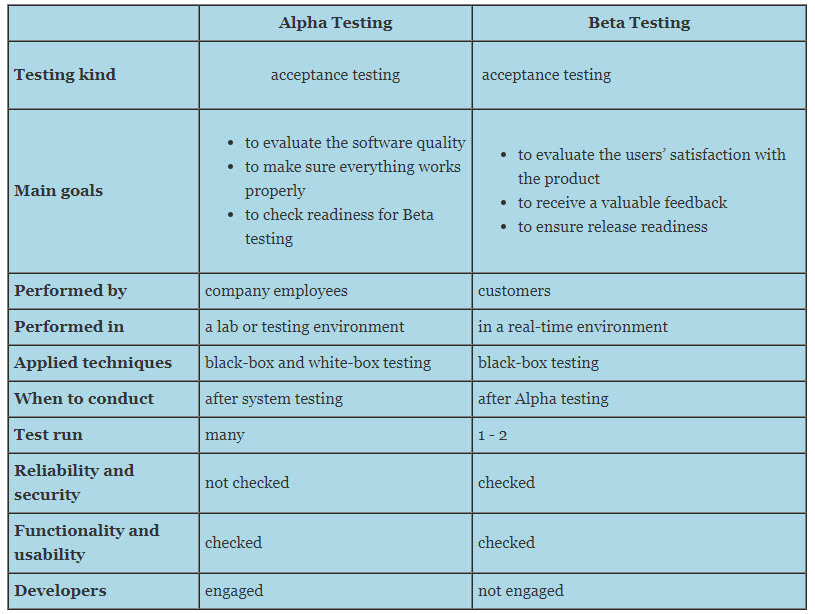 Some people would say that Alpha and Beta testing are performed too late in the testing cycle to be useful, but indeed they are conducted at the right moment to provide the information that can’t be received otherwise.

While Alpha testing is a fresh view on the product and the last chance to find existing problems before release, Beta testing gives an insight into how the users accept the product and whether they are completely satisfied with it.