The Most Important Metrics for Automation Testing

If you want to reach success, you must know how to define whether you did it or not. Every value has its measure. In case of automation testing, this measure is testing metrics.
The metrics, in its pure meaning, is a value of the measurement. Another explanation says that it is a system of measures that displays particular characteristics.
For purposes of automation testing, a metric can be described as a measure which shows past and present conducted tests and applied for defining the future procedures.

Proper automation testing[1] metrics should have clearly defined goals for automation.
After the goals are defined, it is important to track the metrics continuously. After the careful monitoring, you will be able to decide what deadlines could be changed, what assignments must be added, what procedures to adjust and what test strategy must be built according to the outcome of the metrics. To ensure the right direction of your test strategy, ask different questions concerning the test procedures.

What to Do with Metrics

While implementing the metrics you have to:

The Most Important Metrics and Measurement 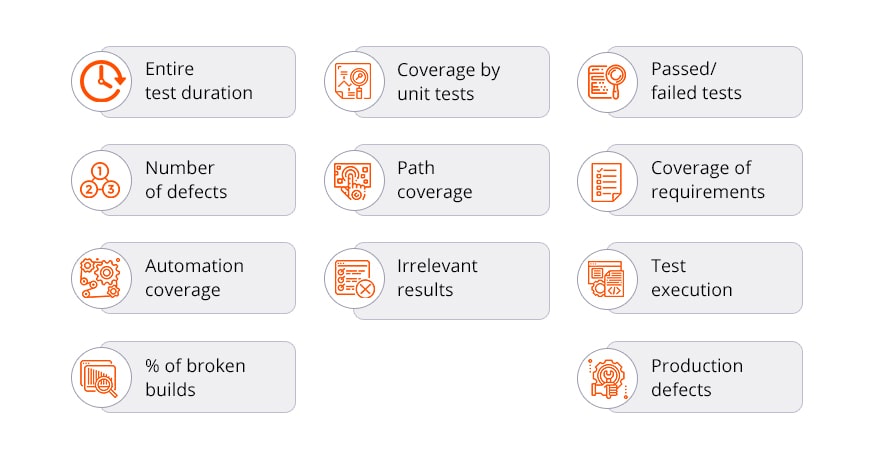 Metric 1. Entire test duration. This metric estimates the time spent to perform all automation tests.
Pros: The test time estimation is an essential part of the testing as it defines the efforts that must be done by a test team and resources that must be dedicated.
Cons: Even the most carefully tracked time of testing does not display the software quality as it shows only the duration.

Metric 2. Coverage by Unit Tests. This metric shows how much unit tests performed to check if they cover the whole code.
Pros: Such a metric gives an understanding of how good the software codebase is.
Cons: Unit tests examine only a certain unit. They can cover each unit, but there is no guarantee that all tested units will form a successful functioning[3] of the entire software. What is more, such tests usually check the code, which is uploaded to the memory. Often the major part of the code is not recorded to the memory, and that is why the full examination of a codebase is not possible.

Metric 3. Passed or Failed Tests Percent. This metric just shows the number of successful and failed tests the same as tests which have to be executed.

Pros: The tracking of percentage gives an opportunity to monitor the testing progress. It allows to compare the progress of each testing circle by composing the batches with passed, failed, and unperformed tests to know the trend of testing and predict the outcome.
Cons: Simple monitoring of conducted tests cannot give information about the products’ quality. Even if the percent is exact and each test is considered, this cannot be the warranty that the quality of the product is increasing, and for QA it is rather an important point.

Metric 4. Number of defects. Here, the metric counts defects, which were found valid during testing circle.

Pros: This allows to compare tested product with previous releases and adjust its quality. There is a predictable function which defines what defects can be found under particular conditions.
Cons: In case of precise testing, this metric may found bugs which are not very important and have not much influence on functionality. The metric may be misleading and show not essential issues which attract testers’ attention from the testing scope.

Metric 5. Path coverage. This metric shows the conditions of each path under testing.

Pros: Here you need more detailed testing which increases the quality of tests. Each program statement is executed once in full path coverage.
Cons: The more branches are, the bigger the variety of paths. Amendment of one “if” to the statement can multiply the number paths in twice.

Metric 6. Coverage of Requirements. These metrics show the features under testing and the number of tests depending on user requirements.

Pros: The importance of this metric is in tracking the number of features which are fulfilled according to the customers’ needs and if they are covered by tests.
Cons: Test, which examines only a single requirement, can check only particular elements, so the value of such a test is not high.

Metric 7. Automation Coverage. Here, the number of executed automation tests is displayed in percentage, compared with the total test coverage

Pros: Like the majority of metrics, this one shows the testing progress and the effectiveness of the automation appliance.
Cons: Automation sometimes cannot disclose all the issues, which manual tests can show.

Pros: Displaying of results can help to spend the testing efforts more effectively focusing on useful results. The picture of both results allows to understand the source of irrelevant ones and reduce them by comparing with useful ones and defining their percentage.
Cons: This picture cannot help with product quality issues but only states the condition of tests.

Metric 9. Test execution. Here is the part of the executed tests, which form a build.

Pros: This statistic displays if the executed tests were performed as it was expected and offers to analyze their results.
Cons: As in other metrics, a detailed percentage is not enough to guarantee the quality release. Information about execution can show how many tests were successful, but the direct dependence of the end result on it is not high.

Metric 10. Broken Builds Percentage. Automation tests can fail and “break” the build. This metric shows the broken builds caused by failures in tests and codebase quality.

Pros: This metric displays the actual code quality, and if the percent of broken builds is going down, this means that engineers act more responsible towards changes in the codebase.
Cons: Excessive attention to this data may cause a random choice of issues and their fixing focusing on the detected broken builds instead of the performance of prioritized test tasks and its main direction.

Metric 11. Production Defects. The metric which performs the main task of testing. It defines the number of detected bugs.

Pros: Such a metric allows to track the risen issues and adjust testing with the addition of new automation tests to catch similar issues in the future.
Cons: Some of the found problems may not be the defects which affect the quality on a serious level. Also, it is better to detect defects earlier, than on production stage. They must be found in the development circle.

The mentioned examples of metrics are important to define the reasonability of testing procedures and the necessary efforts. They provide testers with a clear vision of conducted tests and their impact on product release. To perform proper monitoring, it is important to apply the right metric for the right test. To use metrics as an effective tool in quality assurance, QATestLab offers a range of tips in this and other fields of testing for your review in our blog.