On October 25 QATestLab held a webinar with our best test engineers Ivan, Alex, and Nazar to learn about game testing from experienced insiders, dispel popular myths and discuss unusual bugs they faced while testing games.

More than 5 years ago we began testing games and since then it became one of our favorite directions. Having more than 500 projects on our account and more than 100,000 game bugs found, we’ve got not only practical skills but also valuable insight on quality assurance in gaming.

The webinar became an excellent opportunity for our team to share our ideas and expertise and shed a light on the questions related to game testing[1]. Also, we have decided to capture the brightest moment of the discussion in our blog.

Among all the jobs in the game industry, game testing provokes the most curiosity and interest. Thousands of gamers wonder how to become a game tester. Actually, it sounds like a dream job: getting paid for playing games, what could be better? But is it really like that? We tried to find it out during our discussion.

“When I was a child I saw a TV program about game development. There was a lot of information about what game designers and qa game testers do. When I was a child, yes, it was my dream job and I wanted to become a game tester. You can play all the days earning money and playing games. What could be greater than that? But after all the years in game testing, I realized that it is not just as easy as I thought.” – shares his story Alex, QA Lead[2] at QATestLab. 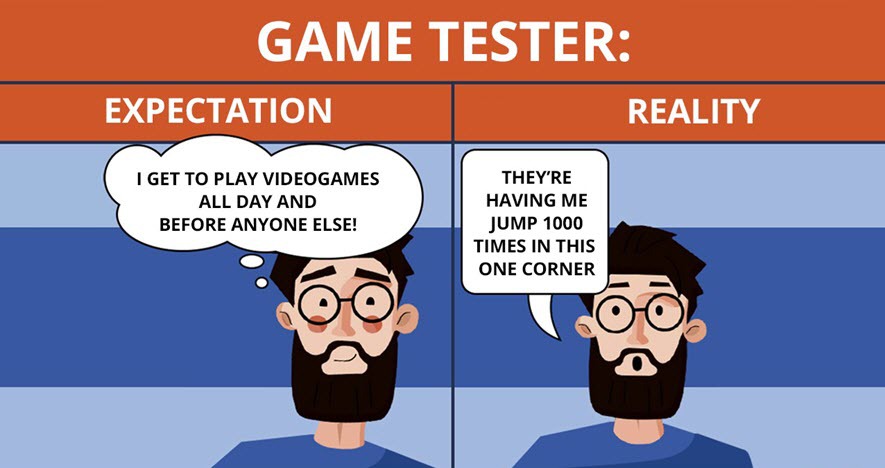 As we have found out at the webinar, if you think of game testing as of endless days spent playing your favorite video games, you’ll be sorely disappointed. Game QA working routine is far away from playing favorite games for pleasure.

“There is definitely a difference between playing and testing games. When you are just playing, you relax and think of nothing else but the game, following the typical gameplay scenario. But if you are a game tester, you should check every corner in the game and test all game mechanics.” – explains Nazar, game QA Lead at QATestLab.

“Testing games requires a lot of attention. Still, sometimes clients ask just to play a game a couple of hours as an ordinary user and give feedback. But it is hard to forget that you are a QA tester and just enjoy the game.” – adds Alex.

The Most Unusual Game Bugs

The work of a game tester is full of surprises, still, some bugs are hard to forget.

“I remember testing a hidden object game several years ago. I entered the house and there was a heavy rain inside all over the rooms. It was quite unusual to observe such a scene.” – remembers Ivan, QA Lead at QATestLab.

“I want to mention the unusual bug fix that I witnessed at a project. I was testing a huge economic strategy, which included market cards to move resources from one castle to another. The declared capacity of one card was 100 units of resources. I found out that the real capacity was 101 units. After having tried to fix the bug for several times, the client decided to change the documentation [3]instead, and changed the capacity of a card to 101 units. Thus, the bug turned out into a feature.” – shares Alex.

In general, software testing – a routine process that requires systematization. A common testing process has the following components: 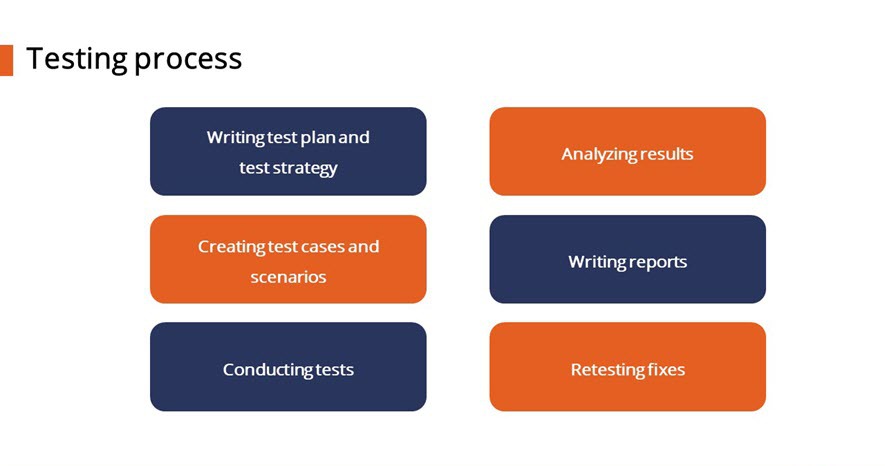 “Routine is usual for the game testing process. We have a lot of regression tests and need to restart the same test cases every day. Personally for me, it is a kind of challenge. I need to keep focusing on the same test cases to keep the quality of the product high. I am quite annoyed by the bugs when playing real games that I’ve paid money for.” – comments Alex.

One more important component for efficient game testing is test documentation. Testing without the documentation complicates the process. Ivan explains:

“It is hard to test without documentation. If you have clear documentation: checklist, test cases – it is much easier to understand what the client needs to be tested and its priority. On the other hand, when conducting ad-hoc testing[4] we use our creativity to find bugs in the most unusual places. Also, all of us have own tricks to find out new game issues. Sometimes the client is really surprised by the way we found this or that issue”.

Having at our disposal more than 250 mobile devices and PC with different capabilities, we decided to ask our testers about the actual number of devices they have ever used for testing.

“The maximum number of devices I have used for testing a single game is around 80 units. I conducted compatibility testing that required to spend 15-20 minutes on each device. I had to check the main functionality of the game and make sure that the game was installed and uninstalled successfully on each device.” – shares Alex. “Still, the optimal number of devices to test a game varies from 5 to 20.”

“As for using emulators, I would not recommend it. With simulators and emulators, you can miss bugs which appear on real devices and vice versa.” – suggests Alex.

“There is only one kind of video game testing I would recommend to conduct on emulators – localization testing” – adds Ivan.

QATestLab do believe in games and strive for the quality of each one. Having extensive experience in game testing we’ve come up with a bunch of useful advice on how to improve gamers’ experience.

“The best advice is not to ignore bugs and QA team. Dev team should keep in touch with the QA department and provide feedback on the bugs found by QA testers without delay. Good communication helps to handle a lot of bugs.” – emphasizes Ivan.

“For my part, I have a few advice to game developers. The first one is to pay attention to documentation, which is very important. It helps the QA team[5] to explore and learn the game better. The second advice would be to combine the efforts of your in-house QA team with an external one to get an independent quality evaluation.” – suggests Nazar.

Well, as we see, to play games and to test them it is a very different experience. Still, to become a really good game tester you need to love games, be detail-oriented, curious, and a team player, striving to achieve the common goal.

QATestLab team is always ready for new projects, new challenges and we know that there are thousands of uncovered bugs waiting for us. So, let us hit the road and go find them – contact us to discuss your testing project!

To watch the record of the webinar – click here[6]! Enjoy watching!